Here is the website and about the news story of a murdered female that was killed by a Salem police officer and by the officer’s K9 dog.

I posted on that website that police and KOIN was using a photo double of the murdered victim to make her look like a bad guy and here is the photo they had at the top of their news story at the beginning.

Now here is a photo of the actual murdered female victim that was used at the very very beginning of her being murdered BEFORE news media and police had time to use a double.

Well all hell broke loose when I pointed out that they were using a look-a-like of her in a fuzzy photogenic photo to portray her as a bad guy, and KOIN news website pulled the photo of the double for awhile and deleted all my posts about the double and here is a snapshot of the same page the double was on only the photo was gone along with my posts about it. 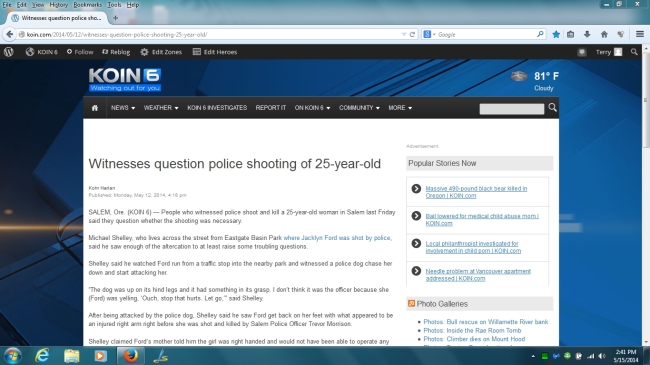 A couple of days later they have that photo up again and now I am blocked from posting on this subject on KOIN news website.

It also appears that KOIN website is trying to take some of their original statements back, but they are still lying and twisting the truth about this murdered woman and still portraying her as a bad guy to make the cop appear justified when he is not.

I am blocked from posting on KOIN now and unable to warn people about this, and I am even getting slandered by people that ARE allowed to post and their making fun of me for trying to warn people.

So police and their civilian groupies do not even hide the fact they murder off people, they slander the hell out of their murdered victims to make themselves appear justified in the killing, they use doubles and photogenic photo’s to portray the murdered victim as a criminal, and they silence anyone and gang up on anyone that cries foul and tries to warn people about their crimes.